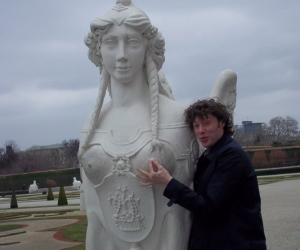 With the body of a lioness, the wings of an eagle, a serpent-headed tail and the head of a beautiful woman, the Greek Sphinx was always going to be a fierce opponent. And that’s before you get on to her vicious intellect. She used to guard the entrance to the ancient city of Thebes, only allowing passage to those who could solve her riddle: what goes on four feet in the morning, two feet at noon and three feet in the evening? If you couldn’t solve her riddle (can you by the way?), the Sphinx would eat you up. The riddle was eventually solved by a man called Oedipus. And so, Oedipus avoided being eaten up, but careered straight into a sequence of events that lead to him killing his father, marrying his mother and stabbing his own eyes out with a pin from a brooch. Apparently the Sphinx was so angry that her riddle was a riddle no more, she ate herself up. The Sphinx at Belvedere Palace is perhaps more reasonable. She’ll allow passage if you tweak her nipples.