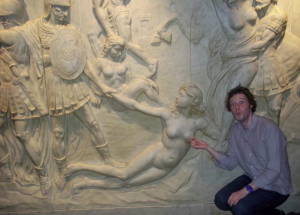 What ancient Rome lacked in its earliest days was women. Lead by Romulus, the tiny settlement on the banks of the Tiber was mostly populated by men from other tribes. Men fleeing persecution, men wanting a better life. And so, to ensure a future generation, Romulus came up with a plan. He’d invite the people of the neighbouring Sabine tribe to a great feast. When he gave the signal, his men were to snatch all the Sabine women who’d come as guests, carry them off and marry them. At first, the women weren’t much impressed by being forced into marriage with Roman brutes. But Romulus promised them all the same rights as their new husbands. Soon after, the Sabine fathers and brothers, uncles and cousins of these women attacked Rome in revenge. But as they faced annihilation at the hands of the Roman army, the Sabine women ran onto the battlefield and pleaded for peace from both sides. Peace, and the promise to honour the bond of marriage.