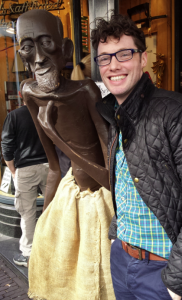 The Old Man
The Old Man, Damstraat 14-16, Amsterdam, the Netherlands

He’s been standing outside this shop since it opened in 1978. Except that it’s not one shop. It’s three. One sells sportswear. One sells tools. And one sells smoking equipment. The name of this three-in-one shop extravaganza is the Old Man. Which is why this particular old man has been standing there for so long. He looks like he’s reached that age when his back goes out more than he does. Methuselah.