Sophie of Mecklenburg-Güstrow was the daughter of Ulrich III, Duke of Mecklenburg-Güstrow, a princely state in northern Germany. And in 1572, Ulrich managed to arrange Sophie’s marriage to one of the most powerful men in northern Europe at the time, King Frederick II of Denmark and Norway. Small matter that Sophie was just 14-years old at the time. Or that Frederick was 38. That’s the way things rolled at the time. And small matter that Frederick would rather have married someone else. He was in love with his mother’s lady-in-waiting, Anne Hardenberg. But his council wouldn’t allow the marriage – because being the husband of Sophie of Mecklenburg-Güstrow would be better for international relations. It wasn’t a great start for the couple. And yet, somehow, they made their marriage work. Or at least, Sophie made their marriage work. She turned a blind eye to Frederick’s heavy feasting, drinking and womanizing. And in so doing, showed herself wiser than her years. In fact, Sophie’s sense of wisdom in matters of the heart served her well later in life, too. In 1599, Danish noblewoman Rigborg Brockenhuus got pregnant. And that meant big trouble for Rogborg. Because she was not married. The Danish court took a dim view of noblewomen having illegitimate children and Rigborg was sentenced to life imprisonment. Admittedly, that sentence would be spent at her father’s castle. But even so. Sophie didn’t think that was fair. We all make mistakes. She intervened. And as a result, Rigborg was allowed out of her prison every Sunday, where she’d get to see her young child at church. Sophie intervened again a quarter of a century later, in 1626. This time, to settle an argument. By then, her son had succeeded Frederick II to the Danish throne and had become King Christian IV. Christian’s son, Sophie’s grandson, another Frederick, was a young man. He had a mistress called Anne Lykke. But Christian didn’t like Anne, thought she was bad influence. So he had her arrested. Christian accused Anne of being a witch. Sophie saw through these accusations, saw they were groundless. She spoke to Christian, and together a compromise was reach. The accusations against Anne would be dropped if she agreed to leave court and return to her estate. A resolution. When Sophie wasn’t mending broken hearts and fixing arguments, she spent her time trading, investing and lending money. Probably very wisely. Because by the time she died in 1631, forty-three years after her husband, she was the richest woman in northern Europe. Wisdom paid. Quite literally. 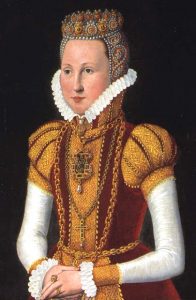