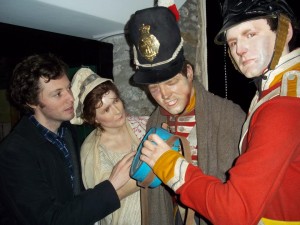 Sunday, 18 June 1815. The Battle of Waterloo. Casualties heavy on both sides. Losses, too.
In his red jacket, Private Peter McMullen of the 27th Inniskilling against Napoleon, against oppression and against tyranny.
As the fighting raged on, Peter fell, wounded.
But Peter McMullen was a man much loved by his wife, Mary. She was heavily pregnant, but when Peter had got his call to arms, she’d followed him all the way from their home in Enniskillen, Northern Ireland, to the edge of the fighting.
And now, seeing her husband injured and cut down, pregnant Mary McMullen walked onto the field of battle.
As she raced towards where Peter lay, a musket-ball struck her and fractured her leg.
But she was a woman determined. She managed somehow to carry Peter to safety. And to save his life.
15,000 troops under Wellington died that day securing victory. Peter McMullen was lucky not to be one of them.
Peter and Mary recovered from their injuries at a hospital in nearby Antwerp before being taken home, where Mary gave birth to their baby daughter.
To recognise her mother’s courage, Frederick Augustus, Duke of York and Albany, and second son to King George III attended the little girl’s christening. The little girl named by her parents Frederica McMullen-Waterloo.