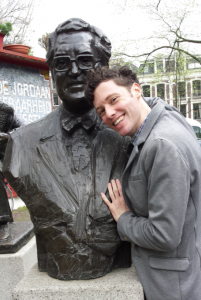 In the 1940s, a poor boy with a rich vibrato could be found in the bars and clubs of Amsterdam, singing the wistful and romantic songs of his city. He was Johnny Jordaan. By the 1950s, Johnny was one of the country’s most popular singers of sentimental songs. But his was a life of highs and lows. Fame and fortune were followed by tax debt and financial ruin. He hid his homosexuality behind the smoke screen of marriage and fatherhood for decades and even attempted suicide after an affair with another man. But finally, in 1982, he revealed his secret, divorced his wife and settled down with his partner, Ton. Only seven years later, in 1989, Johnny Jordaan died of a heart attack. He was 64. Geef mij maar Amsterdam (I prefer Amsterdam) was one of his most popular songs, and remains a sort-of unofficial anthem for the city’s football team, Ajax. 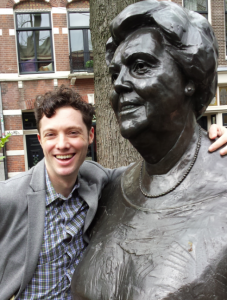 In 1955, the search was on to find the best voice in Amsterdam. A competition had been launched by the local wing of the EMI record group. And the regulars in a small Jordaan café knew someone they thought could win: Tante Leen. She was already in her 40s, and had worked as the café’s cleaner for years. Not once had she sung in public, but every day, she’d sing the sentimental songs of old Amsterdam as she swept the floors and wiped the tables. It took some persuading, but she agreed to take part in the competition. She finished in second place, but went on to release many records before retiring from music to open her very own café in 1975. One of her most famous songs is the duet she recorded with her friend and contemporary, Johnny Jordaan. Ajax is niet dood (Ajax is not dead) was dedicated to the local football team, Ajax. 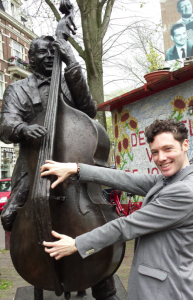 Manke started his career playing the double bass. But soon, he started singing. And made a great success of it. Like his contemporaries Johnny Jordaan and Tante Leen, he sang the traditional, nostalgic songs of Amsterdam. 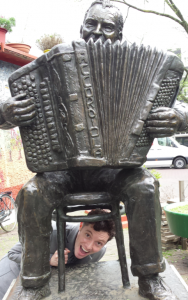 Such a virtuoso was Johnny Meijer on the keys and bellows of his instrument that he became known as the King of the Accordion. He played jazz, he played swing, he played classical and he played the traditional folk music of Amsterdam. But whatever music he was making, Johnny Meijer usually did it with a cigar in his mouth.

They were 18 when they married in 1960, and throughout their career, Jan and Mien Froger always sang together, Jan playing along on his accordion. Fittingly for a couple so devoted to each other, theirs were fond, romantic songs. And fittingly for singers of fond, romantic songs Jan and Mien were together to the end. When she died in 2009 at the age of 67, he followed only two months later.