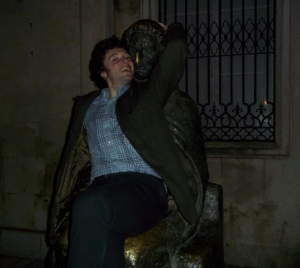 The son of a rich merchant family, Marin Držić was ordained a priest at the age of 18 in 1526 and studied church law in Siena. But the teachers weren’t much impressed by Marin’s enthusiasm for the theatre. He was chucked out of church school and sent packing back to his native Dubrovnik where he wrote comedies and satires poking fun at the nobility. Which didn’t much impress the Dubrovnik ruling elite. By the 1560s, Marin was so fed up with the Republic of Dubrovnik’s rulers, he wrote to the Medici family in Florence asking for help to overthrow them. The Medicis didn’t reply and Marin died unhappy, in poverty and alone soon after.

Here is an extract from one of Marin’s plays…