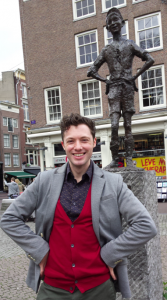 He’s got a rascally glint in his eye and a mischievous, impish grin. But underneath, this little rascal’s got a big heart. Probably. He commemorates Amsterdam’s street urchins and was a gift to the city from the Hunter Cigarette Co back in 1960. And only a few years later, in 1965, he became a meeting point for an anti-establishment, counter-culture anarchist group called the Provo. Perhaps because of his corporate associations with Hunter Cigarettes, perhaps because the word ‘provo’ means troublemaker, much like the Lieverdje himself. Members of the group would meet at Het Lieverdje before going off around the city on demonstrations. They proposed setting up family planning clinics, car-sharing projects and taxes for businesses causing air pollution. All of which seems sensible. But they didn’t get far with changing the face of society. They’d disbanded by 1967.